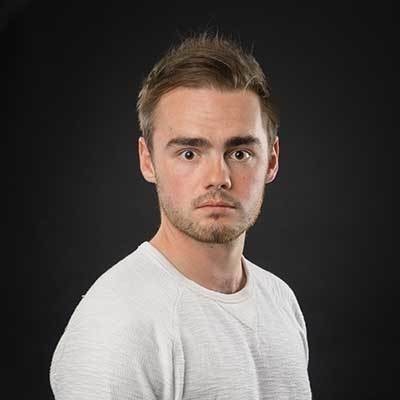 William George Penswick, or "Penners" as he's had to be called for the sake of his colleague, infuriatingly also Will, is a writer, poet, comedy performer, and producer...and total fool. He's also decided to write this like a Wikipedia page because he'll never bloody have one. Please, just this once, indulge this misguided individual.

Early Life (1992-2011)
Will was born in Hammersmith, as he likes to tell people to divert them from the fact that he was raised in Fulham. Despite nicking a load of booze from a primary school parents' evening, at 13 he won the School Cup (the prize for being, basically, the best person in the final year of school). Will went on to secondary school where he cultivated some serious passions outside of theft. As well as winning a string of awards for his footballing prowess (U15B and 5th XI Player of the Year), Will began to write scripts, poems and stories, and to read and act a lot more. He wrote and starred in 'The Final Whistle' when he was 17, a WWI comedy (yep) that went on to win the school's House Drama Award. The play was directed by his best mate, and now colleague, Mark Bittlestone.

University & Dublin (2011-2017)
Acknowledging that writing and performing might be his only shot at happiness, Will went to Trinity College, Dublin to study English Literature and Drama. Will wrote three plays that were produced by the University's Players Society, and directed four. His play, The Unquiet Hour, headlined the University's summer festival in 2015, but was also called: "too complicated" by a student newspaper - Penswick was later suspended for throwing a dustbin through the paper's office window later that day. Will's writing also extended to comedy as well, where he began hosting fundraisers at TCD and performing stand-up. In 2016, Will had his first gig as a graduated adult in Whelan's Pub in Dublin alongside Joanne McNally - his best performance to date. Will also wrote two further short plays for festivals in Dublin and penned a screenplay shortly before leaving Dublin in 2017.

StraightUp (2017-present)
Since starting StraightUp Productions with messrs (and messers they are) Bittlestone and Dalrymple, Penners, alongside his day-to-day work as the Creative Director of the biz, writes and performs mostly character comedy. His debut hour of comedy, Will Penswick: Dank Verse, a head-splitting comedy-poetry bonanza, received high-acclaim and was called "brilliant" (Radio Ha-Ha) and "a comic treat" (PlaysToSee). In 2019, Will performed as the Faroese detective Paetur Paetursson in Will Penswick: Nørdic(k) at VAULT, Leicester, Brighton and Edinburgh Festivals. Mumble Comedy even called him "bloody special". Since 2019, Will has been performing occasionally as, you guessed it, Will Penswick (but his over-confident, poet alter-ego). However, he is performing less to concentrate on his writing and his poetry. Will still writes as electronic music enthusiast and reviewer Ollie Pfizer-Caskey for his blog Home Is Where The House Is - his favourite thing apart from stilton.

Will Penswick has had following things said about him by comedy acts:
"He has me in hysterics...one brilliantly hilarious prick. It's genius." - Maisie Adam
"Will Penswick is brilliant. You'd be mad not to watch him." - Eshaan Akbar
" You stuff was [fire emoji]" - Sikisa

As of October 2020, Will has produced over 300 live comedy and theatre events with StraightUp.

From the end of 2019 onwards, Will has been working principally as a freelance writer and script editor mainly for sports media groups and production companies, helping create short online video content. He has worked for European Tour Productions (IMG) and British Champions Series, alongside a host of individual writers and small production companies. He is always open to new collaborations and looking for freelance work.

Check out some of his work here: