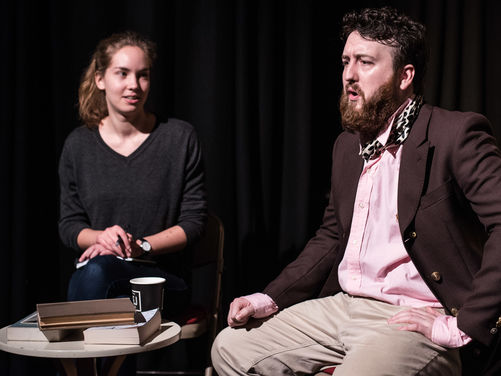 "This riotous adaptation is best described as a cross between Bottom and Blackadder"
Fringe Guru
ADC Theatre (228 capacity)
Cambridge, 21-24 October 2015, 23.00

Synopsis
Tristram Shandy's sizzling autobiography, The Life and Opinions of Tristram Shandy, Gentleman, has been in print for 240 years. To celebrate, Tristram is touring the country, wowing audiences with a theatrical extravaganza which captures the scandal, wit and wisdom of this instant classic.

Laurence Sterne's "famously unadaptable" novel Tristram Shandy has been adapted into an "explosive, anarchic and all-together hilarious" (The Tab) reimagining that gleefully lampoons the culture of celebrity autobiography and brings an obscure and challenging text to a wider audience than it has ever enjoyed before.

Will [REDACTED]'s adaptation of Tristram Shandy was first put on in 2015 at Cambridge's ADC Theatre, before being transferred to the Edinburgh Fringe in 2016.

Varsity ★★★★½
"Every scene, in fact, glitters with more wit than lesser shows muster in an hour."
"Will [REDACTED]'s [is a] deliciously intelligent script, coupled with unerring direction"

The Tab ★★★★
"Laurence Sterne's seemingly unadaptable novel Tristram Shandy is masterfully adapted and unapologetically performed on the ADC stage in an explosive, anarchic and all-together hilarious twist on the original nine volume epic."
"Every element of this production crackled with a fast-paced farcical energy."

Fringe Guru ★★★
"Bringing to life the famously rambling 18th Century novel of the same name, this riotous adaptation is best described as a cross between Bottom and Blackadder."

A Younger Theatre
"There are moments of true genius from the director and writer (Will [REDACTED])."
"In all, this is an enchanting performance. The laughter does not stop throughout, with incredible innovations flowing from every scene."